There’s a Blue Moon on the Rise

Tonight is a special occurrence as far as moons go. It’s a blue moon. That means after tonight’s rising, there will have been two full moons in the month of August. And like the cliché, “once in a blue moon,” would indicate, it doesn’t happen often. The next won’t happen until 2015. 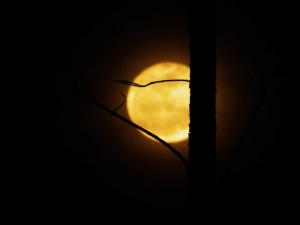 Thank you Kema Woods Walker for taking this beautiful picture of the blue moon!

The name “blue moon” does not refer to the color. According to my research (which, in this case, means I Googled and saw that sites had the same answer), people do not know the origin of the name “blue” moon. It’s just the title that was given to the two moons in one month event.

One of my regular meditation spots, Horizon Intuitive Center, had a full moon meditation last night. They have it every month, but this is the first I have been to. My mom was in town last night to watch the kids, and the stars lined up perfectly, and no one was around to stop me, so I went.

I was lucky enough that my first full moon meditation was not just any old moon, it’s a blue moon. The moon is full tonight, but Joann Wilson, the meditation guide last night, says it is normal to celebrate any time within five days of the full moon happening.

The full moon is a time to release all that is no longer serving a person’s highest potential of the life being lived. This includes more than releasing the need to drink those damned mocha espressos every single day; although I did write that down as one of my releasings.

We were given a piece of paper and allowed to write down what we wanted to let go. Without going into all that I want and need to release from my life, I will say it included things I knew I wanted to let go of, like, I release any fear of earning boat loads of money that I know is floating my way if I didn’t stop it with fear.

I also used Joann’s suggestions to release karmic ties that no longer serve. Release anger, pride, jealousy, resentments, emotional imprints that have taken hold of any of my relationships.

I had a whole page full of releasing. I surprised myself at the things that I am holding on to that no longer serve my highest good. But there they were on the front and back of the paper, ready to be released.

After acknowledging what to release, we did an “om” meditation. A spiritual first for me. Yep, I’m talking about that monk-chant that many people consider strange. Oming has a calming rhythm and is great for keeping a thought-free mind. So, I’ve omed briefly, but this om meditation was oming 108 times like the monks do.

In case anyone is wondering, the counting of mantras is done with mala beads. Strings, like a necklace, that have 108 beads. Each time a chant, or mantra, is done; the finger pushes another bead until the string of them is done. Not all mala beads come in sets of 108, but that is a standard number. The others are probably multiples of 108.

At first, as we were saying the oms. I felt out of place. Then I moved into the rhythm and I felt a great healing come over me. Like the angels that were joining us were helping me release all that I had come to liberate. I felt the energy of the others in the group (around 12 or so of us).

There is something about being in a meditation setting with other people. When the energy is peaceful, calm, flowing, or electric you can imagine what you are capable of doing in “real” life. This type of space is an enchanting space to see your soul and to hear the inner voice speaking clearly.

It tells me that I don’t have to do a thing. My destiny is chasing me down every minute of my life. If I listen to my voice, the whisper in my heart, I will be just fine. No matter what happens, all will be well with my soul.

It’s cloudy today. I’m not sure I will even see the blue moon tonight. But I know it is there. It is helping me to cleanse all that is not serving my highest essence.

Joann says the full moon is a time to release and the new moon, coming up next, is the time to attract new experiences and emotions in to brighten and renew life. Since it happened once, the stars lining up perfectly and no one to stop me from going, perhaps I will make it to the new moon meditation.

Today, I release all that is not serving my highest essence and I attract new experiences meant for me to make the most of my life.

Like Loading...
Aside | This entry was posted in Uncategorized and tagged blue moon, Horizon Intuitive, meditation. Bookmark the permalink.

1 Response to There’s a Blue Moon on the Rise